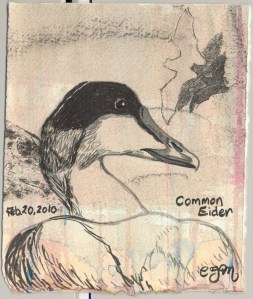 I give you the Common Eider duck, from which we get eider down, the softest, most highly-praised feather-bed and pillow-making material in the world.

In my early years, our family had an Apple IIC (with the glowing green screen and 4-inch floppy disks…), on which we played the Alice in Wonderland Adventure Game. I loved that game. It was the only game I played from start to finish multiple times. And in those early years, we played computer games as a family, taking turns operating the controls. The game included this riddle:

For the longest time, we got stuck at this stupid riddle. We tried every family friendly four letter word we could think of… until, in frustration, we put in “fuck.” Almost instantly, we realized that the correct answer was only one letter off.